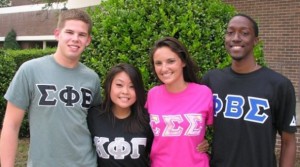 Finding a fraternity to join might, on the face of it seem to be a pretty difficult task if only because many fraternities are “secret societies”, although not all fraternities are secret. A fraternity is actually a “brotherhood” (the word “frater” means “brother” in Latin) and although some of them are secret societies, a large proportion of them are definitely not. A fraternity is simply an organized bunch of men who associate together to form an environment of brotherhood and companionship – there are different reasons for joining these fraternities;

Fraternities are different from many other types of organization simply because each and every member is deemed to be equal with membership being mutually beneficial for all of the “brothers”. Particularly popular among Universities there are many different types of fraternity which focus on lots of different interests;

There are many national and international fraternities which have been around for hundreds, if not thousands of years. These include;
• Freemasonry
• Round Table Club
• Rotary Club
• Samaritans
• Soroptimist Society
• Grand Order of Water Rats
• Oddfellows
• Knights of Columbus (plus lots of other Knights)
• Order of Scottish Clans (in the USA)
• Sons of Norway
• Afro American Sons and Daughters

Joining many of these fraternities has rather more to it than deciding it sounds like “your sort of thing” and turning up at the next available meeting. Fraternities are designed to offer mutual support to all members and the members, in turn, are expected to take the whole thing very seriously. Commitment to the fraternity is extremely important and often involves some sort of ritual, ceremony or other initiation to mark admission. Different fraternities also have extremely strict disciplinary procedures, codes of behavior etc. Many fraternities will not allow new members to simply join them

without first having been put forward by an already trusted member of the brotherhood.
So, to get back to the title, how do you find a fraternity to join? These things generally happen as a natural progression when one begins to associate with like-minded people who decide that they are the sort of person they would like to join them.

Iconic One Theme | Powered by Wordpress